Hive 1 is the original huge hive that survived winter. I split it into two hives making hive 3. I wasn't sure which hive had the queen so after a week, I checked for brood. No new eggs or larva in any of the boxes so I decided to wait another week. Today, I opened Hive 1 and began inspecting. I quickly found a frame with three queen cells so I put it to the side. I decided to add a hive body with drawn frames and shake each frame into it. As I was pulling frames I inspected for larva and a queen. I found a queen on the second frame and quickly caught her in a queen cage. Then I shook each frame of bees into the new bottom deep. I released the queen into the bottom deep and added a second deep hive body (the original) and then put a queen excluder. I added the supers on top of the queen excluder. This way the brood will hatch and then the supers will be for honey again. Best way to get my hive back in order.

I planned to take the frame with the queen cells and make a split since I found the queen. To my surprise, two of the cells had hatched. The third looked like it was almost open. So I used the hive tool and it opened right up and a queen walked out! I immediately caught the virgin queen in a queen cage. I used her to make Nuc 1. 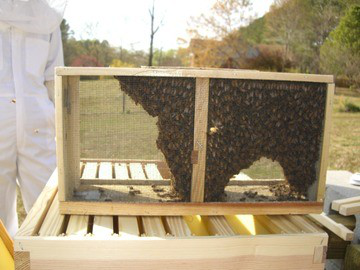 Three pound package of Italian Honeybees ready to be installed in their new hive.